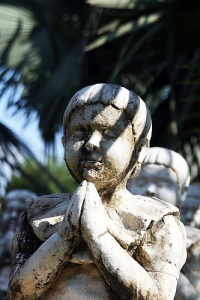 I think just about everyone can relate to this verse. We find ourselves committing the same sins over and over again, even after we swear we’ll never commit them again. This may be one of the hardest things about developing a relationship with Christ. We know what we should do, we want to please Jesus, but then time and time again we fall to our sinful nature. After we commit the sin, we are then left with the overwhelming guilt and inadequacy that follows.

We should strive to be perfect, but understand that we will never be. I think we have a tendency to believe that when we follow Christ, all our past struggles and sins will become easy to conquer. In fact, in many ways the opposite is true. Once the Holy Spirit enters your life and convicts you of sin, your eyes are opened to how sinful your life is. What you may have thought were a few minor problems are revealed as major stumbling blocks to a relationship with God. But the one thing that you have now that you didn’t have before is the aid of Jesus if you reach out to him.

Christianity is so comforting in many ways. Not only do we have a God who cares, but also a Savior who became man. We can’t use the excuse “…but you don’t know what it’s like” because he does. Jesus felt all the temptations that you and I face on a daily basis. He knows how powerful sin is and what we are faced against. That does not mean he gives us a get out of jail free card to do whatever we want, but we can be assured that he knows how hard it is to do the right thing.

If you look at the actions of Peter and Judas before the crucifixion, they are very similar. Judas betrayed Jesus and handed him over to die, while Peter denied him and abandoned him. I guess you could argue that Judas committed the worse sin, but they’re pretty equal. The events that followed their sins, however, are vastly different.  Judas did not believe he could ever be forgiven and killed himself. Peter, on the other hand, sought Christ’s forgiveness and became one of the greatest leaders in the history of the Church.

Our greatest threat to our relationship with God is not the original sin we commit, but believing that we’re not worthy of forgiveness. We are never too far gone. There is no sin that is greater than the mercy of Jesus. Allow shame to convict you and motivate you to change, but don’t let it tell you that you’re worthless or unlovable. Call on Jesus to extend his grace to you and pray that he gives you the strength to battle your sins. He is waiting with an extended hand to welcome you back into his arms, but you have to grab a hold of his hand.

3 thoughts on “Struggling With Sin”