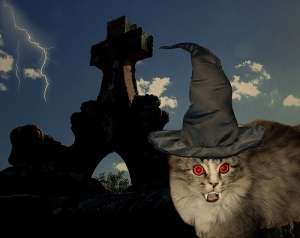 This Is Halloween – A Spooky, Scary Children’s Poem For Halloween

Upon the strike of midnight
Corpses stir in their graves.
A smoke-like mist hangs in the air of night,
And invisible hands creak open cemetery gates.

Children asleep in beds,
Tummies full from bags filled with tasty treats.
But approaching through the streets are the undead
With hearts that no longer beat.

Skylines show silhouettes
Of ancient women flying, perched upon wooden brooms.
Searching, smelling with hooked noses where they can get
Fresh children to snatch from their rooms.

Don’t pet the family kitty.
Tonight she may be a witches’ cat.
Oh, she may normally be nice and pretty,
But tonight she’s likely to attack.

Ghosts hover above bed posts,
Sucking youthful life while youngsters dream.
Delighting in the feast of their hosts
Until all that’s left is a blood-curdling scream.

Dracula awakes beneath his coffin,
Hungry for young and tasty blood of red.
Grins as he sharpens his teeth to pierce smooth, soft skin
From easy prey asleep in beds.

As the full moon appears behind pale, grey clouds
Men transform in the night.
Werewolves howl horrifying sounds,
As claws emerge from skin under moonlight.

And do not forget the skeletons,
Whose bones and rib cages rattle as they walk.
Empty eye sockets look upon daughters and sons,
Hiding in the closets of houses on silent blocks.

So don’t close your eyes, sleepy child.
Be alert. Be ready for spooky, scary things.
That sound you heard was not your imagination gone wild,
For this is Halloween.